Due to high demand, this item is IN PRODUCTION.
To ensure the earliest delivery available,
we advise that you place your order in advance. 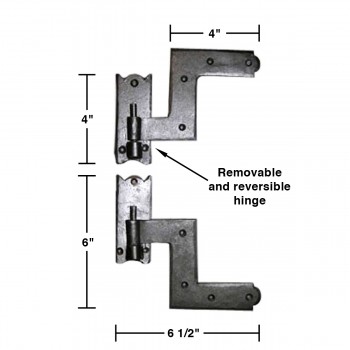 I found the shutter hinges to be in great condition and manufacture for the price, and pretty much similar to the original pieces the house originally had in the early 1900's. The screws were slotted, and appeared as a wrought type, but didn't stand up well to the screwdriver, which left a slight lip on most of the screws installed. One snapped in the wood, and the other was so damaged I though I wouldn't be able to replace it. I did match the driver blade to the width of the screw slot, but the material just wasn't as strong as it should have been.

Great solid hinges. Used them to hang some custom baby gates I made that weigh about 40 lbs a piece and is swings like butter with 2 per gate. Star off for the problem mention about some of the holes not lining up well but I just went through them all and paired each piece together that worked best with its counter part and everything was fine for me.

After buying and returning many other products these hinges won the install. These were easy to install and came with everything that was needed. Added a little white grease to them so that the lift and opening and closing was smooth. Once they wear a little bit then no grease will be needed.

They look great and very thick. Definitely rustic some aren't welded square but doesn't make them less attractive or functional.

the quality is off the charts I could not be happier ,,,

This hardware is very high quality at a competitive price. Other than it being more common during the period of real, operable shutters, I’m scratching my head why the screws are all flat head and not phillips.

I used it on a custom baby gate. It looks great and matches the farm house decor.

These are nice hinges they look great and get the job done.
A couple things that could be a little nicer and why they are not 5 star.
The pins were not exactly straight to the face, making it a little difficult to align and hang.
They are made of pot metal, and one of mine broke when mounting ( Renovator's Supply gets a 5 star for there service in getting it replaced quickly and without hassle.)
It would be nice if the top of pin were rounded or pointed to help in mounting the hinge.

Write a Review
You have not written any reviews about this product.    Write a review
No Videos
View Printer Friendly Version Send Product Info Via Email Our Terms and Conditions