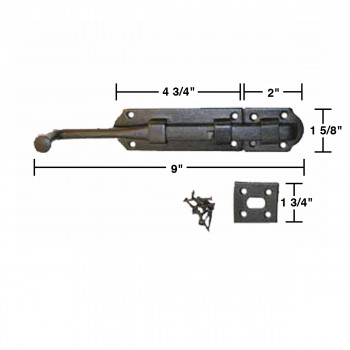 I have a small set of double doors that meet with an overlap in the middle. The doors are located under a window. The doors only had a bolt into the floor on one door and that was not the door that closed first. Try as I might I could not locate a bolt to match the original so I thought trying to get close would look like an intentional error in matching. I chose this one to look obviously and intentionally different. It has a long throw, mounts easily and seems to work fine. The curved spring under the bolt holds it up when unbolting so the door can be swung open and closed. After reading other reviews I did open up the holes and use larger wood screws for mounting

Works well. Stop pin fell out within a week but was easily replaced with a standard screw.

Very well made and well priced

Very cool. Have it installed on fence gate. Working well so far. As a few others have stated, it is a bit “sticky” to slide at first but the more it’s used the easier it gets. Had to remove the stopper screw so the lock bar went further out just for more secure hold, only because the gap on my gate was wide. Overal looks cool, and working like it should.

These are nice latches. My only complaint is that the screws it comes with are really wimpy. I drilled the holes out and put in bigger screws.

These are a cool design and the long handle with the knob gives plenty of leverage. Also like the fact that it has two mounting options. A few issues, 1 - there are only two sets of screw holes and if you are looking for any type of security from this, you need to be able to drill out the holes a little bit to use a bigger fastener. The second issue I had was I bought two of these and the thickness between them was very different, almost twice as much. One is a little thinner and has more play, so the fit when closed is not as tight as it's twin. These must be hand cast for that to occur, which adds to the uniqueness. So if security is your big issue, this may not work, but for aesthetics, these are great. Knocking a couple points for the huge difference in material thickness and tiny screw holes... I was hoping for a little more security for a little less work.

Loved the cast iron but it is very small. No screws come with either. It is a functional lock but looks small on big door.I wont use it for original purpose. Comes with 2 plates to switch from floor and door lock.

I happen to live in a family home very well built in 1916 with hand forged hardware on doors and windows remarkably similar to the bolts I purchased from you. Upon receipt I was not disappointed in the quality of the items you supplied and was impressed that you also provided traditional slot head screws to fit them in place, as indeed Phillips screws would be anachronistic! You might be interested to know that these bolts are going to be installed on French doors in a 140 year old house on the island of Cyprus in the eastern Mediterranean, where the original doors had similar hand forged bolts, but some have rusted badly and are difficult to operate! Similar bolts are now unavailable on Cyprus, so I will take them there myself.

Extremely satisfied with these latches in fact I am getting more. Bought a 110 year old farm house and they fit the decor perfect and provide security.

Write a Review
You have not written any reviews about this product.    Write a review
No Videos
View Printer Friendly Version Send Product Info Via Email Our Terms and Conditions